The Sydney Gay and Lesbian Mardi Gras embodies all that I love about my multicultural and irreverent hometown. The story of its origin and transformation is remarkable. Mardi Gras is an international model for how to achieve justice for a despised minority. It offers a beacon of hope to more than 70 nations where homosexuality is still a criminal offence and where the penalties for conviction include jail terms and execution.

The first Mardi Gras in Sydney was in 1978 and was a key driver for the decriminalization of homosexuality across several states and territories in Australia. It was a catalyst for the liberalisation of the laws controlling public protest in its home state of NSW. We thank the late former Premier of NSW Neville Wran and his Attorney General Frank Walker, for the repeal of the Summary Offences Act (NSW) in 1979 and the decriminalisation of homosexuality in NSW in 1984.

The influence of Mardi Gras in changing cultural attitudes towards homosexual and transgender people is equally, if not more, significant. This transformation has made Sydney and Australia a much happier place to live for gay, lesbian and transgender people and their families. And the transformative role of Mardi Gras is still essential today. There are many cultural and faith communities that continue to find homosexuality, or gender diversity, utterly unacceptable. You have to be a very brave person from a Muslim community to join Mardi Gras openly.

The thrilling thing is that the positive shift in attitudes towards homosexuality, and the legal reforms that followed, were primarily achieved not only by the Parade but also by a cascade of cultural, sporting and community events that grew from the Parade. Some very big naughty parties have also been influential—Sydneysiders love to party!

The first official Mardi Gras Festival was directed by Tony Crewes and Rodney Thorpe in 1985. Their vision was to engage a much broader audience and to include people who wanted more than a Parade and a party. The idea of the festival was to offer a myriad of ways to be involved.

These days the Festival includes Fair Day, attracting over 70,000 people to a family-friendly carnival; Queer Screen, a major Mardi Gras Film Festival; and Queer Thinking, a program of in-depth community forums on topics like ‘coming out’ in sport, marriage equality, raising a family and gender trailblazers.

The Festival is held over a couple of weeks with over 80 events. It includes partnerships with mainstream arts organisations like Belvoir, The Performance Space, the Darlinghurst Theatre Company, Carriageworks and the Powerhouse Museum. In 2015 we celebrated the Anti-Homophobia in Sport Accord with Cricket Australia, the AFL, the NRL, Australian Rugby Union, the Football Federation and the Sydney Convicts and their Bingham Cup. Sporting features are a central part of the Festival.

The audience for our Festival and Parade is now boosted by the power of social media. In 2015 a tribute video to Freddie Mercury, Are You Ready for Freddie? went viral with over 2.5 million views. It featured the Sydney Gay and Lesbian Choir, Olympian Matthew Mitcham and veteran drag queen, Joyce Maynge and was filmed in one, continuous, unedited take on Pyrmont Bridge.

Preserving our history for new generations is now an urgent priority. The Pop-Up Mardi Gras Museum in 2013 was a great first step. It enabled archivist Nick Henderson to display original documents, media coverage, film and costumes dating back to 1978. Photographers William Yang, Mazz Image and C. Moore Hardy, whose body of work captures the intimate and creative history of Mardi Gras, gave presentations with images to audiences who were not even born in 1978. But this was a temporary display.

It’s true that parts of our history are included in other collections. The works of C. Moore Hardy are in the City of Sydney Library Archive Pix. The Pride History Group website hosts the 100 Voices project. The Australian Lesbian and Gay Archive stores great material. The Powerhouse Museum Collection at the Museum of Applied Arts and Sciences holds costumes, including those by Ron Muncaster, who won 11 costume prizes in 11 years, including six first places.

But we need a permanent Mardi Gras Museum to share our history and display our creative work, including objects created in the Mardi Gras Workshops. Peter Tully set up the first workshop in 1982 and led the transformation of Mardi Gras from a battle to a parade. One of the most famous creations is the iconic Fred Nile’s Head on a Plate. It was built by Ron Smith for the Sisters of Perpetual Indulgence. Fred Nile is still with us as a NSW politician, and he is still opposing our legal equality. This is part of the witty, gritty cultural history of Sydney. It deserves a permanent home. Tourists would love it.

The cultural calendar of the Festival increases public engagement with Mardi Gras. Yet the Parade is the heart of the matter. Hundreds of thousands of people come for the flamboyant floats, dancing groups and exotic costumes. The Parade makes people happy. Australians will forgive almost anything if you can make them laugh.

The ubiquitous cry of ‘Happy Mardi Gras’ reflects a genuine, positive community engagement on a scale the original marchers could never have imagined. Public protest and ‘coming out’ began in Sydney with Gay Liberation around 1972. We never dreamed Mardi Gras would become so big and so integrated into the economic life of our city.

When it began in 1978, Mardi Gras had just a few hundred gays, lesbians and drag queens celebrating our identity by walking through the streets. We were trying a new strategy to achieve social justice. The plan that night was to be a ‘celebration’ in contrast to a ‘protest’. It was Ron Austin’s idea. After scores of protests for Gay Rights that ended in arrests, Ron said, “Let’s have a street party.” His fellow-activist, Margaret McMahon responded, “You mean a Mardi Gras?” And so the idea was born. Ron is now 86 and has never missed a Parade.

But on that first night in 1978, the marchers met violent resistance from police. Back then, the dark corners of the NSW Police were running the sleazy parts of Sydney in partnership with organised crime. They didn’t want homosexuality or prostitution decriminalised. It would have cut their share of the income from the illicit brothels and gay bars. Fifty-three people were arrested and their names and addresses were published on page 3 of the Sydney Morning Herald. At the time, homosexuality was illegal and considered to be a mental illness and against God’s will. Some individuals paid a heavy price with their families and employers. 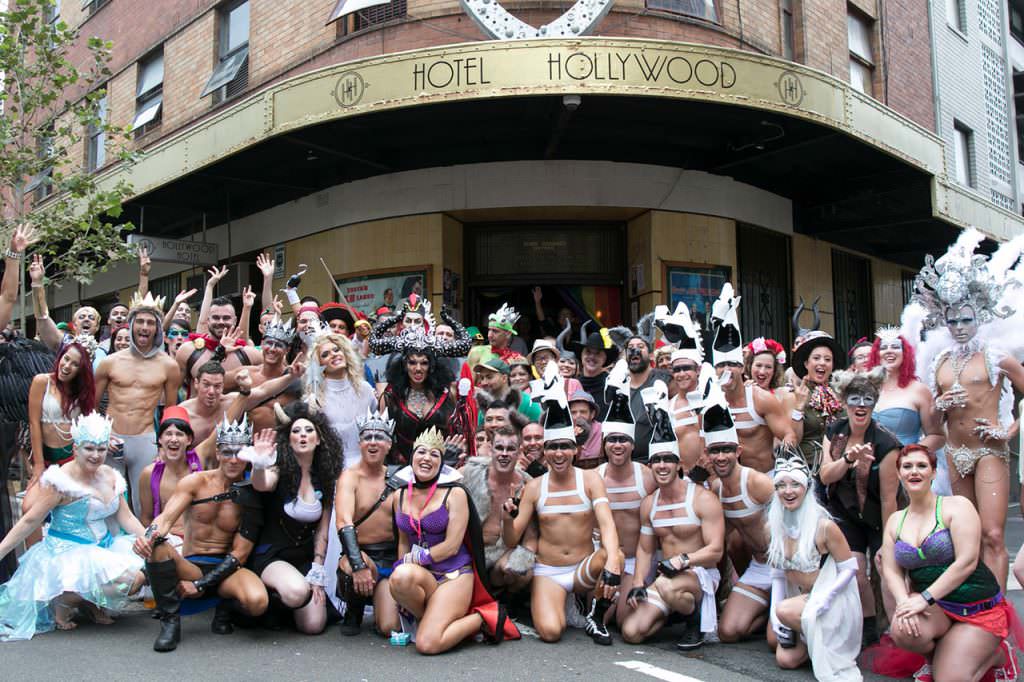 The Hollywood Hotel is highly popular in Surry Hills as a Queer friendly pub/hotel. This group of friends gathered together pre-parade to have photos taken. It shows just some of the costumes worn on the night of the Sydney Gay & Lesbian Mardi Gras Parade. Photo Credit: CMoore Hardy.

Mardi Gras changed all that. Now the Gay and Lesbian Liaison Officers in NSW Police are world leaders in community engagement. It is the marchers in uniform that bring the biggest cheers from the crowd—from police to emergency services and the defence forces. When I see the rows of NSW Police, marching with military precision, I feel elated.

The Mardi Gras Parade is now the largest public event in Australia. In 2016 there were over 12,000 participants and 170 floats in the Parade. Over 300,000 spectators crammed the parade route. It is estimated over 25,000 interstate and international visitors come to Sydney for Mardi Gras and the Festival events, injecting in excess of $30 million into the NSW economy.

Mardi Gras opened the ‘closet door’ for us. We leapt out en masse and discovered lots of people wanted to join our party. Australia used to be known around the world for a jumping marsupial and sporting achievements. Now the world knows we have homosexuals as well as kangaroos, and that some Aussie Olympians are ‘out and proud’.

All major political parties now march in the Parade. Party leaders write messages of warm support to be printed in the program of events. The Prime Minister, Malcolm Turnbull and his wife Lucy, walked with us in 2016. In 2005, the then Governor of NSW, Dame Marie Bashir AD CVO, the Queen’s representative in Australia, officially opened the Mardi Gras Festival in Hyde Park. In 2015 she was joined by her husband, Sir Nicholas Shehadie as Chiefs of Parade. They led the Parade in an open-topped car, driving just behind the Aboriginal and Torres Strait Islander group. The City of Sydney’s Lord Mayor, Clover Moore has been a long-term and loyal supporter. It is always great to see the Rainbow Flag flying over the Sydney Town Hall.

The economic contribution of Mardi Gras to tourism is undeniably a factor contributing to our mainstream acceptance. Major bank ANZ has been a Principal Partner for ten years. Other funders include Qantas, Facebook, Google, Twitter, Airbnb and Canon. Media partners have included ABC TV, Network Ten, Foxtel and SBS.

But in my observation over the years, it is not just commercial interests that drive this engagement. Many businesses, government and non-government agencies have got involved because of internal lobbying by their own staff. Marching in Mardi Gras or funding associated events is a way that CEOs can show support for diversity within their own staff and customers, as well as among the broader community.

Faith groups have joined us, including the Quakers and Progressive Jews from the early days and, more recently, the Uniting Church. This is profound social change.

In 2016 the NSW Government, its police force and Fairfax Media (who publishes the Sydney Morning Herald) apologised for the events of the first Mardi Gras in 1978. Member of Parliament Bruce Notley-Smith addressed Parliament and said, ‘For the mistreatment you suffered that evening, I apologise and I say sorry. As a member of the parliament which dragged its feet in the decriminalisation of homosexual acts, I apologise and say sorry. And as a proud gay man and member of this parliament offering this apology, I say thank you. The actions you took on June 24, 1978, have been vindicated.’ 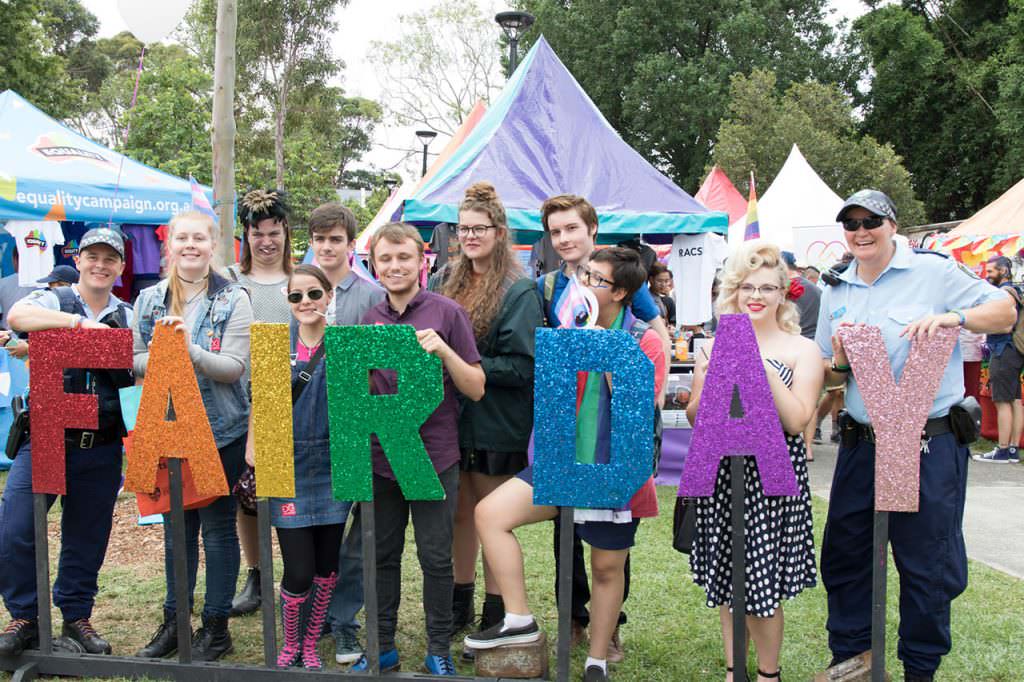 The Fair Day image shows a group of young community members with two police offices from NSW who work with the community. Fair Day is a family day for all members of Sydney’s GLBTIQ community. This year it was held in Camperdown Memorial Park, Newtown. Photo Credit: CMoore Hardy.