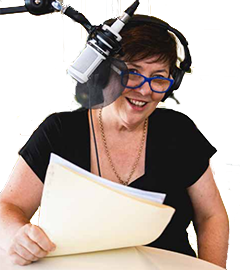 Julie is renowned across Australia for her warmth, humour, intelligence and commitment to social justice. After 20 years as a broadcaster with ABC Radio, ABC TV and Network 10, she is now a freelance journalist, facilitator, trainer and speaker.

From private workshops with small groups of people to huge public events, Julie has built a reputation for bringing people together, getting them communicating and helping them achieve positive outcomes.

Julie has become an Ambassador for Targeting Cancer. She had oropharyngeal cancer treated with radiation therapy and chemotherapy in 2013, and is now back to her usual busy life.

Over 100,000 Australians are diagnosed with cancer each year. In 2010, 21,235 cancers were registered in New Zealand. It is estimated that about half of them will benefit from radiation therapy as part of their overall cancer treatment.

Watch this series of videos to follow Julie's treatment journey, from diagnosis and treatment to embracing the future.

The primary purpose of this book is to give encouragement and hope to people with a diagnosis of head and neck cancer and their families and carers.
Click here to download it.

As previously reported at Croakey, the road to alcohol regulation has been long and fiercely contested. This Friday, Australian and New Zealand Food Forum Ministers will decide whether to support an effective health warning on alcohol labelling. Or alcohol industry lobbying may result in a watered-down version.

A strong message of support for the label below has been sent by more than 150 leading health, medical and social sector organisations and thousands of community leaders and advocates – including former Governor-General Quentin Bryce – who have signed an open letter launched today.

The Foundation for Alcohol Research and Education (FARE) and Australian Medical Association (AMA) have also released a joint statement, together with new consumer data testing showing that a red, black and white label with the words ‘health warning’ is the most visible and relevant warning, and best way of alerting people to the risk that drinking alcohol in pregnancy can cause lifelong harm to babies.

“Most Australians don’t understand the true extent of the harm caused by drinking alcohol during pregnancy,” AMA President, Dr Tony Bartone, said in the statement.

“All the research and evidence indicate that red colouring, contrast, and appropriate wording are key to a noticeable... read more