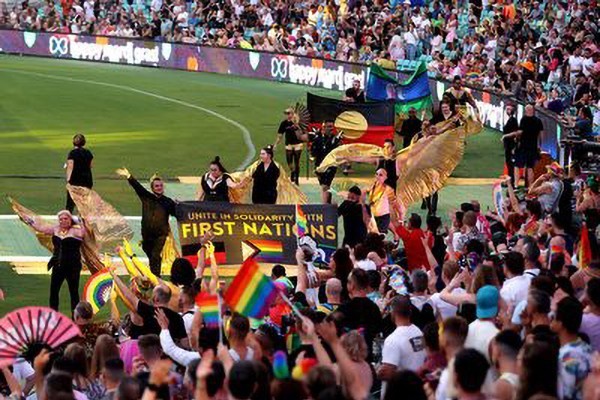 Personally I think there are arguments for and against both locations. For children and families, as marchers and viewers, I think the SCG has big advantages. The capacity to include music, performance & light shows into the Mardi Gras experience is massively better at the SCG. For older people like myself, it is heaps better at the SCG. There is massive seating with great eye line and access to toilets and food.

It may be because I am 67 and a grandmother with one little one and another due this month, but I see problems with Oxford Street. You have to be fit and strong to get a place you can see on Oxford Street. It involves getting there very early, waiting hours, not needing frequent toilet access and the capacity to withstand a crush and be tall enough, or safe to stand on a milk crate, to see anything.

Or you need to afford a big fee in a stand raising money for charity. It is very hard for people with children, people with disabilities, older people generally and anyone with health issues. Many people can’t afford the seats raising funds for worthwhile charities and that is where the toilets and food are provided.

I get the impression that some people feel Mardi Gras is less radical and provocative if it is at the SCG rather than on the streets. Personally, I don’t see that to be necessarily so.

The increased participation and leadership by First Nations people at Mardi Gras is one of the major, progressive developments in recent years. The extended opening sequence by First Nations people last night was deeply moving and powerful in its advocacy for cultural recognition and language reclamation. It included a Welcome to Country, a Smoking Ceremony, a First Nations dance sequence, a musical performer and two live, on-field interviews.

The key production team for the first hour, broadcast live on ABC iView, was made up almost entirely of Aboriginal people, including my co-host for that hour, Jack Evans. The ABC and Mardi Gras are showing leadership on our key national challenge – closing the gap in all areas of national life for First Nations people.

In the 1970s we protested on the streets because we were so grievously oppressed and discriminated against and it was the only way to be heard and to exert influence. We have made significant progress over the last 50 years. Personally, I think the mainstream reach that TV and social media coverage offer us in this current era is a positive, at both a national and international level.

Again, personally, I applaud the inclusion and participation of mainstream public and non-government organisations. I also welcome the participation of corporate businesses. The  entrenched discrimination of the influential leaders of many of the major faith groups in Australia is our primary concern now, including the Sydney Anglican Church, the Catholic Church, the Eastern Orthodox faiths and the Muslim leaders.

These groups engender great trauma on children and young people who feel “different” and their families. We need mainstream support, from the public and private sectors, to bring change here and to set new norms that state discrimination is no longer acceptable. These conservative faith groups really matter in Australia because they provide so many educational, health and welfare services.

SCG or Oxford Street? Or can we have both by marching up Oxford Street and then gathering together at the Sydney Cricket Ground for music, food and fun?

What do you think?