At 18, Julie McCrossin was lost and only a couch away from being homeless after telling her parents she was homosexual.

“They were lost and I was lost and I had to leave home,” she said of that time in 1973.  “Like so many people in their teens, I had problems with drugs and alcohol, ” she said of a wild period between when she left home and gave up drinking in her early 20s.

They were lost, I was lost and I had to leave home.
Julie McCrossin

McCrossin, now 61, is an ambassador for the Australian Red Cross. The broadcaster and journalist believes  its secular and judgment-free programs, such as Save a Mate, would have made her late teens safer if they had existed 40 years ago. 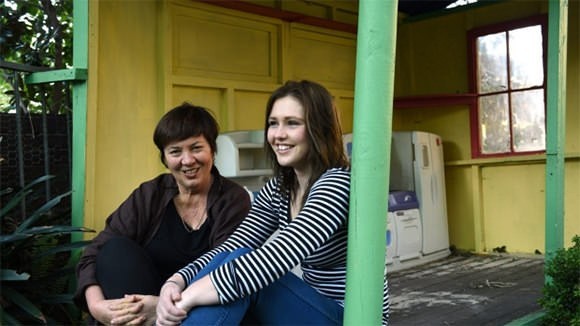 Georgia was about the same age as McCrossin, and also a “crazy teen”, when she got into “pretty bad drugs” a few years ago. After finishing her school certificate and starting a full-time job, the teen’s life imploded. She was homeless for a few months and went “in and out of refuges”.

Now 19, the mother of a 2½-year-old daughter has been clean for nearly three years. If it had not been for the Red Cross program, which included Save a Mate sessions, Georgia believes she would have lost custody of her daughter.

Drugs destroyed her life and it became “a daily game” to get the next fix. “Once I had touched it, I couldn’t turn it back. My whole life got ruined, and it destroyed me, and I was horrible to my family, and it was all about getting more and getting more. The next two years of life were gone. I put my mum through a hell of a lot. I hated myself and the things that I would do, the things that I would say, how I looked. ”

After graduating from the Red Cross year-long residential program for young parents, Georgia is studying and hopes to become pastry chef.

“I am much better, and I like myself as a person,” she said. Georgia is bisexual, something that was not a problem for her.

But when McCrossin was a teen, it was difficult to be anything but heterosexual.

“In that era, [homosexuality] was against the law,” McCrossin said. “It was still a mental illness .. and all the faith groups were utterly rejecting. Like most people, I had a period of great unhappiness and conflict with my parents who were ill-equipped in that era to cope with that experience. My parents were distressed that I said I was gay, and we had such high levels of conflict that I had to leave home. We are now very close and reconciled, and have been for decades.”

She didn’t blame them: “You have to imagine a time when there was nothing positive in the media, or anywhere, about homosexuality. And if you inquired from your priest or your doctor, you were told by the minister it was against God’s will and it should be stopped. And you were told by your doctor that it was a mental illness. In Macquarie Street, people were actively administering aversion therapy to male homosexuals.”

It was a time when being a homosexual was to be cast out of mainstream society.  About the time McCrossin came out, Macquarie University student Penny Short lost her teacher’s scholarship after a poem she wrote about loving another woman was published in the student newspaper.

After the horror of the Orlando shootings, McCrossin said it was a very cruel thing for Sydney’s Catholic and Anglican churches to say: “You can be gay, but you must not have a relationship.” This made it difficult for many lesbian, gay, bisexual and transgender young people to ask for help from their welfare services.

Today McCrossin is studying theology and is an active member of South Sydney Uniting Church in Waterloo, which has been a source of great happiness. “It is quite a precious part of my l life, and that rejection when I was 18 by family and by my faith group was a very painful thing.”

I won’t tag the many researchers I know. I just hope this gives you a giggle! #research