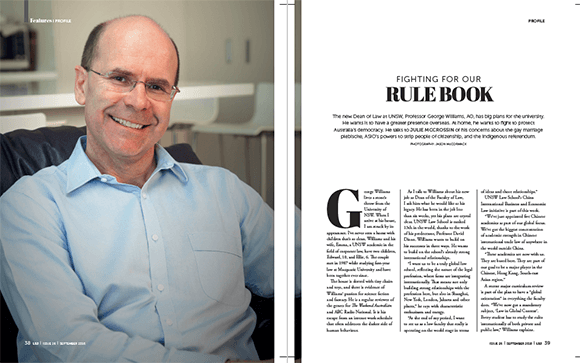 The new Dean of Law at UNSW, Professor George Williams, AO, has big plans for the university. He wants it to have a greater presence overseas. At home, he wants to fight to protect Australia’s democracy.

He talks to Julie McCrossin of his concerns about the gay marriage plebiscite, ASIO’s powers to strip people of citizenship, and the Indigenous referendum.

Constitutional law is the rule book of the nation. It is the laws that determine who can exercise power and who controls the lives of others. It is the rules that structure how the nation is governed and how the different tiers deal with each other. It is how citizens interact with power. It is the law that governs the exercise of politics and power.

Published in the September issue of the Law Society of NSW Journal.