Do we really embrace difference in our Rainbow communities? How warm is our welcome to newcomers? A panel of peeps will share their five-point-plans for successful dating in discussion with lesbian icon and new grandmother, Julie McCrossin.

Tips from our audience will be encouraged. Join us for a frank discussion with revelations of failure followed by the promise of success – plus songs from the heart.

Julie McCrossin is a broadcaster and journalist with qualifications in the arts, education and law. She became active in Gay Liberation at Sydney University in 1974 and was arrested many times at the countless demonstrations she attended. In 1978, Julie was part of the morning demonstration in the city. Later that night, she joined the crowd of activists outside Darlinghurst Police Station when the 53 people arrested at the first Mardi Gras at Kings Cross were taken there.

Her most vivid memory of that time is the wall of police blocking the entrance to the Central Court of Petty Sessions when the people arrested had to later appear in court. Julie remembers the gay activism of the 1970s and early 80s as a time of trauma, but also of exciting comradeship and cathartic release.

In 2019, Julie was awarded a Member of the Order of Australia for significant service to the community, particularly through LGBTQI+ advocacy roles and to the broadcast media. 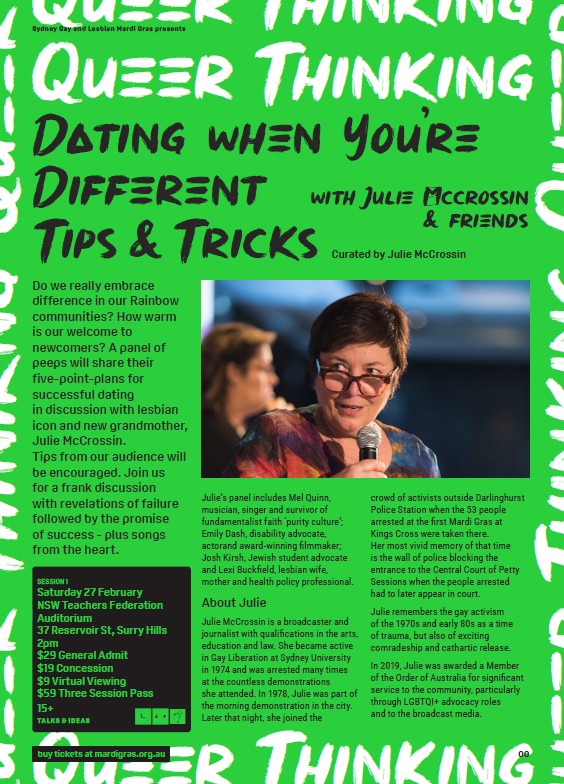 1 thought on “Dating When You’re Different – Tips & Tricks, with Julie McCrossin and Friends”