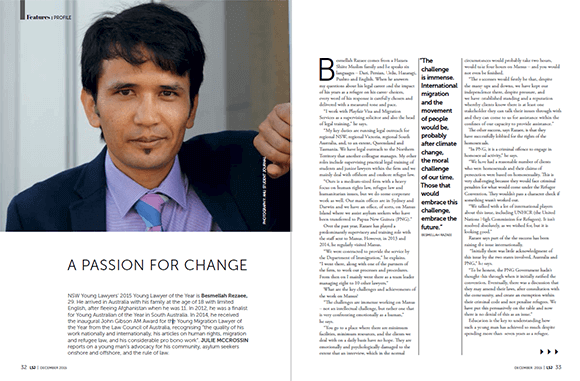 He arrived in Australia with his family at the age of 18 with limited English, after fleeing Afghanistan when he was 11.

In 2012, he was a finalist for Young Australian of the Year in South Australia. In 2014, he received the inaugural John Gibson AM Award for the Young Migration Lawyer of the Year from the Law Council of Australia, recognising “the quality of his work nationally and internationally, his articles on human rights, migration and refugee law, and his considerable pro bono work”.

Julie McCrossin reports on a young man’s advocacy for his community, asylum seekers onshore and offshore, and the rule of law.

Besmellah Razaee comes from a Hazara Shiite Muslim family and he speaks six languages – Dari, Persian, Urdu, Hazaragi, Pushto and English. When he answers my questions about his legal career and the impact of his years as a refugee on his career choices, every word of his response is carefully chosen and delivered with a measured tone and pace.

Published in the December issue of the Law Society of NSW Journal.

As you may’ve noticed, @charliersmith1 has recently become very attached to wearing a crown - but sadly, yesterday it broke…

Well, this morning, a staff member (who was on a day off) turned up on the ward with a brand new one (and 3 spares!) Safe to say, her day was made! 👑