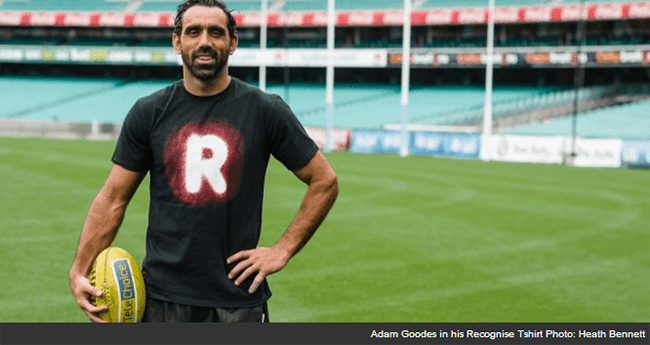 When Australian rules football player (with the Sydney Swans) and anti-racism campaignerAdam Goodes was made 2014 Australian of the Year, this was his response:

“Tonight I was honoured to be named 2014 Australian of the Year. I am deeply grateful to the many people who have inspired and supported me over a lifetime. This recognition is as much – if not more – about them as about anything I have achieved.

“In this role, I expect I’ll be further humbled as I meet Australians from all across the country and all walks of life – and hear about their aspirations for our country.

“There will be chances to reflect on the opportunities that lie ahead for our nation. One of those – which I feel passionately about – is the work being done to prepare for a referendum to recognise the first Australians in our Constitution and remove discrimination from it.

“I’m proud to have been chosen for this honour. I’m also proud of the 40,000-plus years of history of my ancestors, the Aboriginal and Torres Strait Islander peoples of Australia. And yet that impressive Australian story is still missing from Australia’s founding document.

“What a great day it will be for our nation when we fix that historic exclusion.”

Adam Goodes has long been engaged in various good causes. In what follows he talks with Julie McCrossin about his role as a Qantas Ambassador.

Andyamathanha man and AFL champion, Adam Goodes has added Qantas Ambassador to his long list of high profile community activities. As a proud Aboriginal man, Goodes believes this role with Qantas offers him a significant opportunity to promote the interests of Indigenous people.

“Qantas has a longstanding commitment to promoting reconciliation between Aboriginal and Torres Strait Islander people and the broader community,” Goodes says. “It’s an honour for me to play an active part in engaging the public in their Indigenous program.”

Goodes is also looking forward to working with Qantas to promote the Recognise Campaign which is working towards a referendum to include Australia’s first peoples in the Constitution. “I’m a longstanding supporter of this recognition,” Goodes told me.

As a Qantas Ambassador, Goodes is also pleased he will be helping the national carrier to educate employees and the public through the Qantas Reconciliation Action Plan (RAP). The plan is all about providing employment opportunities to Indigenous people, supporting Indigenous-owned businesses, offering Qantas staff and travellers opportunities to experience Aboriginal and Torres Strait Islander culture and using the airline’s unique position to educate business partners and customers about Indigenous art, culture and excellence in education, sport and the performing arts, as well as broader Indigenous issues.

The involvement of Adam Goodes as an Ambassador is part of a broad range of partnerships Qantas has with Indigenous people, organisations and supporters, including Reconciliation Australia, the Yothu Yindi Foundation, the Clontarf Foundation, the Australian Indigenous Education Foundation and Bangarra Dance Theatre.

Julie McCrossin’s radio interview with Adam Goodes can be heard on Radio Q on all national and international Qantas flights from March to May 2014.

Trying to feel bubbly without the booze? 🥂

With #alcohol being the most common drug used in Australia, it’s no surprise it can be hard to celebrate without it.

Reframing the way you think about alcohol may help you to try.

Here are some tips on how to do this. 🙌

Hi Communities 👋 our Writer-In-Residence - Brett Scholz has written another amazing piece on having more consumer leadership moving beyond engagement and involvement in decision-making across health sector. Read more about it here: https://go.unimelb.edu.au/o5te

Friends at conferences - please do not assume that the people that you talk to do not know anything. I just got told that I should read what Stanton et al found about pain.