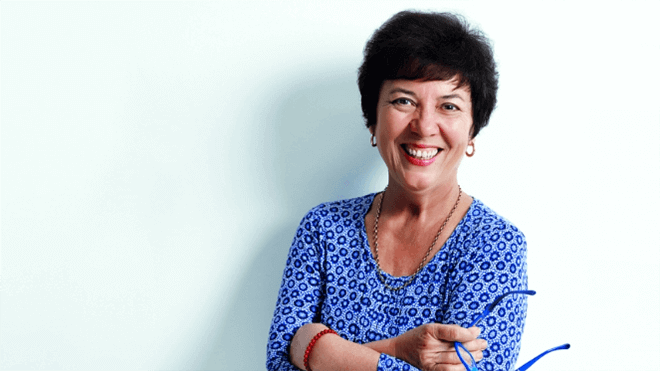 Julie McCrossin had no voice for quite a while last year as she started her road to recovery from throat cancer.

Of course, it’s ironic and poignant that someone who speaks for a living – whether on ABC TV or Radio National, or facilitating events (her main role now) – can be rendered speechless.

But, after I’d met her in Sydney, it also struck me what a valuable, articulate and brave voice we now have back with us. Brave because it’s not easy talking about giving up alcohol aged 24 – drink changed her behaviour – or the many years of struggle to stay sober, or her long advocacy for gay rights, or how she might have died last year with so much left to live for.

It’s a year since McCrossin’s cancer diagnosis. She’s going well, and last Thursday she and her long-term partner, Melissa Gibson, were getting married in New York City. Before she left, she said: “Melissa and I will marry in Manhattan after 18 years together, with our adult children as witnesses. We feel a deep, peaceful joy and gratitude for the legal recognition from the mighty city of New York.”

McCrossin, 59, grew up in the Sydney suburbs of Hurstville and Vaucluse (“So I’m a silvertail!”), where her father was an orthodontist. “I have very happy memories of an adventurous, water-based, sailing-on-the-river type of childhood.”

Her mother met her father in London during World War II. Marjorie McCrossin was in signals with the Women’s Auxilliary Air Force. Robert McCrossin was a Pathfinder pilot with the Australian air force.

“My father was one of the men who bombed Dresden,” she says. “The most dangerous place to be in the allied forces in World War II was in bomber command, the place where you were most likely to die.

“He volunteered to be a pathfinder, which meant additional tours of duty. Pathfinders dropped the flares and the others came in to see where to bomb. You had to go in lower, stay over the site longer. So the death rate was high. I admire the courage of my father and his crew.”

I ask McCrossin how her father coped with being part of bomber command that flattened German cites.

“My dad’s been dead for over 25 years but I did talk to him about it. And he had no qualms whatsoever. He had lived through the London blitz. My mother was buried alive twice. Her family were bombed out of their home twice. It was the first major bombing of a civilian population in world history and it was a dreadful experience that my father had witnessed.

“So he saw what they were doing as an essential response to the Nazi threat. He appeared not to have qualms, even though obviously many civilians died.”

In January, McCrossin went to London and laid a wreath for her father and his crew at the bomber command memorial that the Queen opened in 2012.

“I’m proud of my father and his crew’s courage in the face of [a] chance of survival that was extremely low,” she says. “To keep getting into that plane and heading out is something that has inspired me my whole life.”

McCrossin was a guest speaker at the Jewish Museum in Sydney on this topic. “At one [event], to an audience of mainly Holocaust survivors and their children, a woman came up. She said she was a Jewish slave labourer in German cities that were bombed by bomber command and they, as Jews, were not allowed to go down into the shelters when the raids came over.

“She said they would dance in the streets and call out ‘Hurrah!’ and clap and say, ‘Bring it on to end this hideous regime’. Unless one was present as the bombs rained down on London, Coventry and other cities, and unless you had first-hand experience of what total war was like in World War II in Europe up against the Nazi threat, I don’t think we can imagine how committed you could be to bombing as a way of trying to stop the war.”

In 1972 McCrossin went to Sydney University to study arts and law. It was the time of Germaine Greer’s The Female Eunuch and political activism. “In those early years at university I did have a wild time,” she says. “I was an activist, particularly around women’s liberation and gay liberation.”

McCrossin has written about her struggle with alcohol as a young woman, and how she became teetotal aged 24. “I was a very studious and happy child at school … but in my heart from the age of 13 or 14 I wondered if I was gay.

“And we have to flash back to the ’60s and remember that, in that era in New South Wales, it was against the law and still a mental illness, and it was against God’s will. I was a Christian and I was troubled by that. In those early years I was very much focused on activism and, like many people of that era, drank too much and took drugs.”

She gave up drink in 1979 and still attends a weekly self-help group to stay sober. How bad was her alcohol use? “Obviously bad enough to worry me,” she says. “Enough to have sought a range of help to stay off the grog ever since. And I continue to do so. The decision to stop drinking and the decision to seek help … is the single most important thing I’ve ever done in my life.

“I’m extremely lucky in that I’ve never doubted for a minute that it was best not to drink. I was the sort of person who had a personality change when I drank, and could become a maudlin or aggressive person. Only orally aggressive. And I know alcohol was the prime cause of that.”

A long-time campaigner for gay rights, McCrossin says she is referred to as “a 78-er” – one of those who attended the many demonstrations in Sydney in 1978 in support of gay rights.

“While I was not at Kings Cross where there were 52 arrests made in 1978, later that night there was a huge rally outside Darlinghurst police station where people who were arrested were taken,” she says. “We were involved in bailing them out in court next morning. That demonstration was just the latest in a score of demonstrations and other activities, media interviews and so on that had been going on since about 1973.”

One of the major results of that activism was the first Gay and Lesbian Mardi Gras in 1978, which she says remains, 36 years later, a crucial part of Australian life. “There are still many multicultural communities in Australia for whom homosexuality is absolutely unacceptable,” she says. 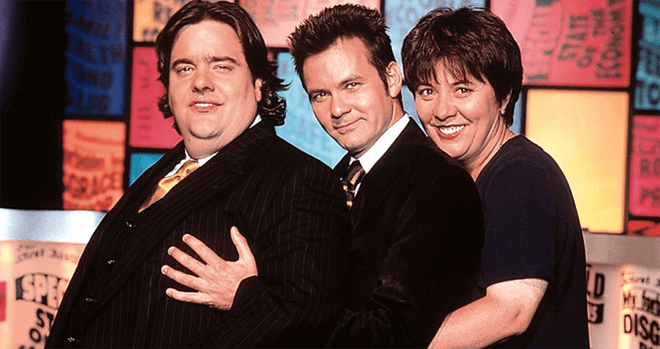 Good News Week, joining Paul McDermott and Mikey Robins. “It was a life-changing experience,” she says. “It was thrilling to be in a late 20th-century version of vaudeville. I got to meet politicians, singers, dancers, writers, comedians. To have entertainment and news commentary – it was just a whole load of fun.”

She later spent five years hosting Life Matters on ABC Radio National. “It’s still one of my favourite programs,” she says. “Its unique contribution to the media is that it brings together experts who have done good large-scale research on a topic with people directly affected.”

Last April, McCrossin, a non-smoker, was diagnosed with “very aggressive, stage-four” throat cancer. “Shocking and discombobulating,” she says. ‘‘I have done scores of interviews with people who’ve survived cancer. I have facilitated panel discussions for many years and have hosted scores of conferences on cancer … I would have thought I knew the territory.

“But until someone says, ‘It’s you, and you’ve got an 80 per cent chance of recovery’ … It was explained to me there are 10 people in the room with what you’ve got – eight live and two don’t. And this was told to me like it was really good news. It was tough.”

The primary site for the cancer was in her tonsils, but it moved into her lymph nodes, to the back of her tongue and the side of her throat. “Within nine days I’d started daily radiation and weekly chemotherapy – very intense treatment for a month. I lost the capacity to eat anything other than liquid food,’’ she says.

“I lost my voice for six weeks and there was no guarantee that it would return. I lost 20 kilograms in six weeks. I lost my hair. I spent my days in rooms with people who were either more sick or less sick than me. You know people who die. And I’m still in daily contact with people still receiving treatment who have become my friends, who may die.

“When I was told I had cancer of the throat, my first concern was my partner who had very recently lost both her parents. So the thought that I had stage-four cancer and I had to tell her was a very sobering experience. And I also have an 89-year-old mother who I’m very close to. I said to the doctor, ‘Just keep me alive for them’.

“I’m also by nature a help-seeker, as indicated by giving up drinking at 24 and sticking to that decision. I’ve consistently sought help throughout my life for addiction. And with cancer I’ve been the same. I’ve sought both psychological and psychiatric help as well. I consider myself by nature an optimistic and resilient person, but I’ve been shaken to my core. Returning to a normal working life is a bit harder than you’d expect.”

Self-employed for seven years, facilitating events such as seminars and panel discussions on sensitive topics including suicide prevention, mental health and family law, McCrossin has been back working part-time since September.

McCrossin lives with Gibson and Gibson’s two children from a previous relationship – a son aged 24 and a daughter, aged 21. “The day I announced my diagnosis, she dropped everything,” McCrossin says of Gibson. “She’s quite a career-oriented person. She dropped everything to look after me.”

McCrossin says she is much more intensely grateful for life but the diagnosis didn’t fundamentally change her outlook. “The trick is to make the changes before you get the cancer. So I already was a person who focused on daily gratitude.

“I could have died a few months ago, and I could have died when I was still shocked and a bit discombobulated, and I’m just so grateful that I’ve had the opportunity to return to emotional stability and communicate to my friends and family quite directly just how much I care for them …

“I hope I have the opportunity, if I do have to die, to die calmly … I may have 10 or 20 years, but I feel grateful for the past few months.” 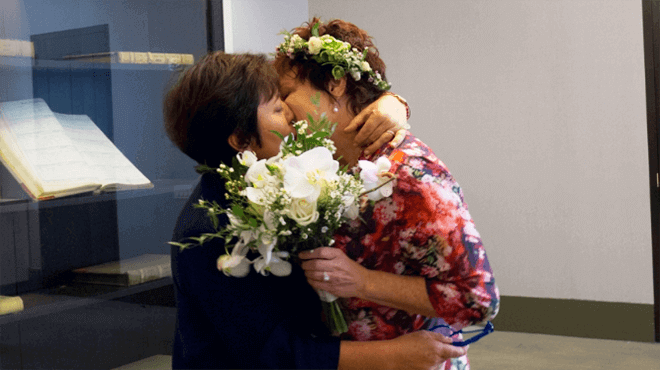 The memorial at Club Q continues to grow.

Those who drove from Palmer Park to the club have also added flowers, signs & other momentos to the collection.

More steps forwards not only in a literal sense, but also physical.

Fantastic @adamgordon1978 and the @GeriSoc. Let’s make this everyone’s business!

President of the BGS @adamgordon1978 appeared on @BBCBreakfast this morning discussing #deconditioning and older people in hospitals, the importance of regular exercise and #rehabiltation in the community. Watch him on BBC iPlayer from 9:16 https://www.bbc.co.uk/iplayer/live/bbcone