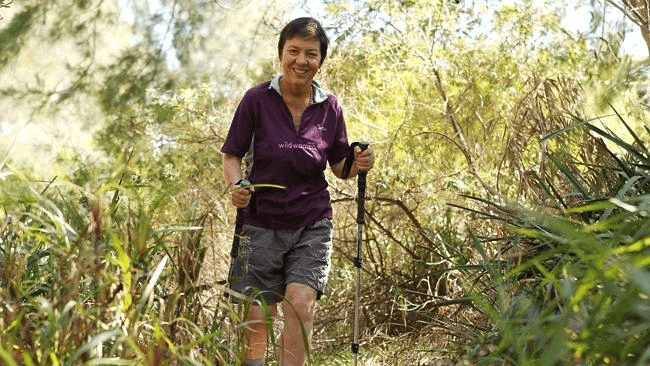 Recognising it was time to get fit, McCrossin’s first walk around the Sydney Harbour bushland reignited happy childhood memories, a love of nature and got her moving again.

Julie McCrossin is an Australian radio broadcaster, journalist, comedian and campaigner for women’s and gay rights. She is best known for her role as a team captain on the news-based comedy quiz show Good News Week between 1996 and 2000.

Recently, McCrossin overcame her greatest challenge in her battle with throat cancer.

Now on the road to recovery, she is looking forward to entering this year’s Sydney Coastrek – a fundraising walk for The Fred Hollows Foundation along the coastline of Palm Beach to Coogee and around Sydney Harbour.

How many times have you done the Sydney Coastrek?

JC: I’ve started four Coastreks and completed three. In 2013, I stopped at 30km but was diagnosed with throat cancer a few weeks later, so I thought 30km wasn’t too bad (laughs).

What’s your goal for this year’s event?

JC: I’m aiming to walk 5km for Coastrek. I’m still recovering from radiation and chemotherapy, which caused me to lose over 20kg very rapidly. However, my body is rebuilding and I am enjoying the training very much. I may keep walking beyond the 5km.

What are your three favourite treks?

JC: The Jatbula Trail in the Nitmiluk National Park in the Northern Territory is spectacular. Five days without seeing another soul in Jawoyn country, sleeping each night beside water holes and seeing rock art on ancient stone escarpments brings deep peace. Climbing The Castle in Morton National Park in southern NSW was probably the hardest thing I’ve ever done but the beauty, isolation and challenge were exhilarating. The foreshore of Sydney Harbour may be close to home, but the walks are gorgeous.

JC: Fresh bread, cheese and salami out of a backpack on the side of a steep cliff on the Amalfi Coast in Italy, where I was enjoying a self-guided trek with my oldest friend, Sophie.

Favourite place to travel in Australia?

JC: I love to drive out into rural and remote Australia. I like long, straight roads with a huge sky and lots of space.

I’m at my happiest when the road signs say names like Dubbo, Nyngan, Wilcannia, Cobar and Broken Hill.

JC: I love cheesy. I think mass, popular culture becomes crowded because it’s generally worth seeing. I just try to go when things aren’t too busy.

JC: In early April my partner of 19 years, Melissa Gibson and I will get married in New York in Lower Manhattan. Our adult children, Luke and Amelia and a few close friends and family will be there.

Is there anything you can’t travel without?

JC: I lack sophistication and always carry too much of everything.

Now in its fifth year, Sydney Coastrek has raised over $4 million for The Fred Hollows Foundation. This year’s 50-100km trek (Feb 28 to March 1) hopes to raise $2.5 million, which will restore the sight of nearly 100, 000 people. To register go to coastrek.com.au

Zionists need to show how they fit into progressive agendas - +61J ⁦@NSWJBD⁩ https://plus61j.net.au/featured/zionists-need-to-show-how-they-fit-into-progressive-agendas/