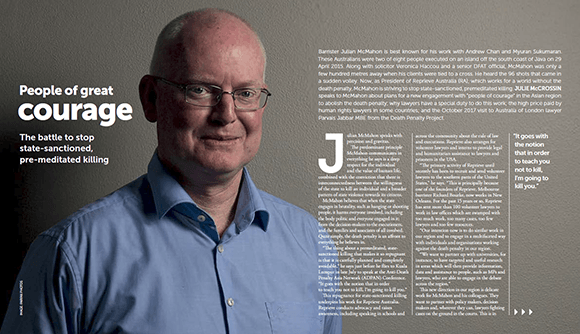 Barrister Julian McMahon is best known for his work with Andrew Chan and Myuran Sukumaran.

These Australians were two of eight people executed on an island off the south coast of Java on 29 April 2015. Along with solicitor Veronica Haccou and a senior DFAT official, McMahon was only a few hundred metres away when his clients were tied to a cross. He heard the 96 shots that came in a sudden volley.

Now, as President of Reprieve Australia (RA), which works for a world without the death penalty, McMahon is striving to stop state-sanctioned, premeditated killing.

Julie speaks to McMahon about plans for a new engagement with “people of courage” in the Asian region to abolish the death penalty; why lawyers have a special duty to do this work; the high price paid by human rights lawyers in some countries; and the October 2017 visit to Australia of London lawyer Parvais Jabbar MBE from the Death Penalty Project.

“You realise how much courage is involved to stand up and fight for rights. Everyone has a duty to take action to end injustice.”

Published in the August issue of the Law Society of NSW Journal.