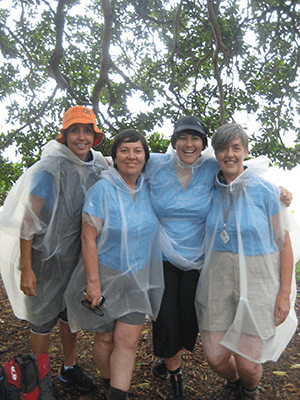 Walking 30 kilometres through the night, buffeted by gale-force winds is no mean feat – especially when followed, just hours later, with a starring role in Mardi Gras.

Julie McCrossin completed a stint of this year’s blustery Coastrek on Saturday morning before before her work for Sydney’s LGBTI community was recognised at the annual street carnival.

”It was wild below Strickland House in Vaucluse, it was challenging, but there was still an atmosphere of buoyancy,” says the gay rights campaigner and Good News Week stalwart, who was joined by Jody Broun, co-chairwoman of the National Congress of Australia’s First Peoples, as part of the 4Health team.

The ABC’s Linda Mottram completed the 50 kilometre walk, while Senator John Faulkner, who guided blind trekker Ben Phillips for the length of the 100-kilometre walk, was last to cross the finish line, cheered on by Gabi Hollows, wife of Fred whose eponymous charity benefits from the event.

This year the walk, which runs from Palm Beach to Coogee, has so far raised $1.7 million, with women making up 90 per cent of its participants. 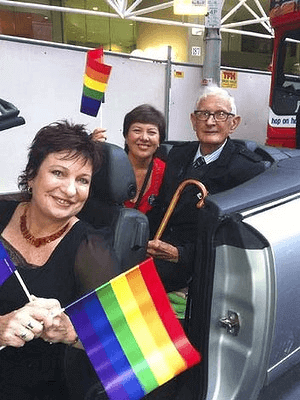 On Saturday evening, McCrossin joined 84-year-old Ron Austin, a ”quiet, dignified” force behind gay rights, in an open-top car, one of the lead vehicles in the Mardi Gras procession. Austin is part of the group who started Mardi Gras 35 years ago – the ”’78ers” – and is credited with shifting the emphasis from protest to celebration. That first year, 53 people were arrested, their names and addresses published by the Herald the following day. All charges were later dropped.

”An idea can change everything,” says a reflective McCrossin. ”It was deeply moving, one of the most special experiences of my life. As we moved quite slowly up Oxford Street, people were yelling out ‘thank you, thank you’. I’ve been to every Mardi Gras and there was a gentleness about this one – you really felt there was a recognition that these old people had done something a bit brave.”

At Taylor Square, Olympics ceremony organiser Ignatius Jones led two young people from the Wear It Purple organisation as they raised a rainbow flag in Austin and McCrossin’s honour. ”It was a handover to the next generation. It was emotional, people were crying,” McCrossin says. As for any partying, the day eventually caught up with Austin, McCrossin and her partner, Melissa Gibson. ”The chiefs of parade got out of their convertible, got into a taxi and went home,” she says.