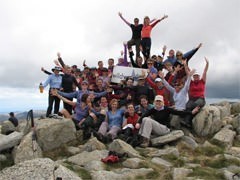 Nearly 40 Wild Women On Top summited the highest mountain in Australia this weekend, in honour of the late Freda Du Faur. This happened because a team of inspiring women had the courage to put together a plan, the determination to make it happen and the commitment to carry it out and make it the special event that it was.

The Freda Du Faur Kosi Climb took place the weekend of 3rd–5th December 2010, to commemorate the 100th Anniversary of Australian Freda Du Faur’s historic and ground breaking climb of Mt Cook in New Zealand on December 3, 1910. Julie was among the Wild Women On Top who honoured Freda’s remarkable career as the leading female mountaineer of her generation.

Standing at 2,228 metres above sea level, Mt Kosciuszko is the highest mountain on mainland Australia. Located in the Snowy Mountains in the southern section of The Kosciuszko National Park walking is the only way to reach the summit.

Three groups of women set out early on Saturday morning, taking different routes up the mountain and meeting on the summit at 2pm to celebrate the achievements of Freda as a female mountaineer and pioneer, and indeed to celebrate their own achievement of carrying a full pack (16- 21kg) to the summit. For many of the women in the team, this was a first time achievement, having never carried a full pack, and for some, their first time camping in the wilderness!”

“You can achieve anything you want in life if you have the courage to dream it, the intelligence to make a realistic plan, and the will to see that plan through to the end.” – Sidney A. Friedman