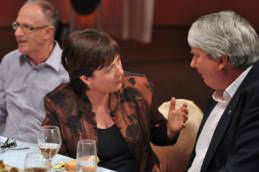 Julie in conversation with Father Frank Brennan in Compass: Marriage Right Vs Rite

In the first of a two-part series examining the issue of same sex marriage, Compass meets three couples who would dearly like to get married – if only they could.

Every day of every year somewhere, sometime, someone is getting married. This timeless ritual is a celebration of the legally binding union of a man and a woman to the exclusion of all others. But in Australia not every loving couple has the right to marry. What does this mean for them? How does it play out in their lives? And with all the rights now afforded to same sex couples, why do they even want to get married? Compass finds out by spending time with three very different couples at home, at work and with their families. 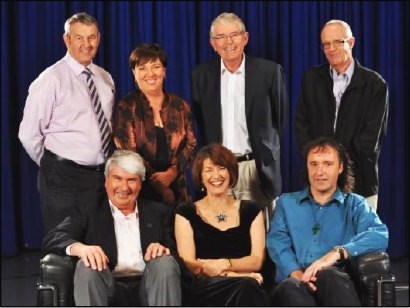 Geraldine Doogue invites six people to dinner to explore arguments for and against same sex marriage in Australia.

Last week Compass featured the stories of three same sex couples who would dearly like to get married – if only they could. This week we hear a range of different views on this issue: Anglican Bishop The Right Reverend Robert Forsyth, Baptist minister Reverend Nathan Nettleton, Catholic Jesuit priest Father Frank Brennan, Professor Dennis Altman, broadcaster Julie McCrossin and dad Geoff Thomas. In a lively and robust dinner discussion with Geraldine Doogue each makes their case, and argues the pros and cons of allowing same sex couples to marry in Australia.